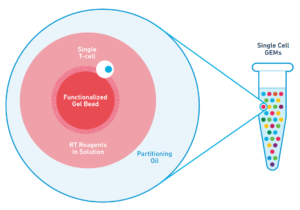 The 10X Genomics Chromium System, provides a reagent delivery method that enables thousands of micro-reactions in parallel, each containing an identifying barcode such that all sequencing library fragments produced within a partition share a common barcode.

Gel Beads, containing barcoded oligonucleotides, are mixed with a sample, which can be high molecular weight (HMW) DNA, cells, or nuclei. Gel Beads and samples are then added to an oil-surfactant solution to create Gel Beads in EMulsion (GEMs), which act as individual reaction vesicles in which the Gel Beads are dissolved and the sample is barcoded. Barcoded products are pooled for downstream reactions to create short-read sequencer compatible libraries. After sequencing, the resulting barcoded short read sequences are analyzed with bioinformatics that use the barcode information to map reads back to their original HMW DNA, single cell, or single nucleus of origin.

The Chromium System also enables single cell transcriptional RNA profiling of hundreds to tens of thousands of individual single cells. Single cell suspensions loaded onto the system are partitioned into GEMs, where transcripts are tagged with cell-specific barcodes. The barcoded cDNA is then pooled for downstream processing and library preparation. For immune repertoire profiling, the cDNA undergoes targeted enrichment for T- or B-cell receptor transcripts prior to library preparation. After sequencing, downstream bioinformatics tools use the cellular barcodes to group transcripts that originated from the same cell, revealing the transcriptome and/or the full-length T- or B-cell receptor sequences of each individual cell.

When entering the Ghent University Faculty of Pharmaceutical Sciences through the main entrance, elevators will be located in front of you. NXTGNT is situated on the third floor. When exiting the elevators, NXTGNT is located at your right-hand side.